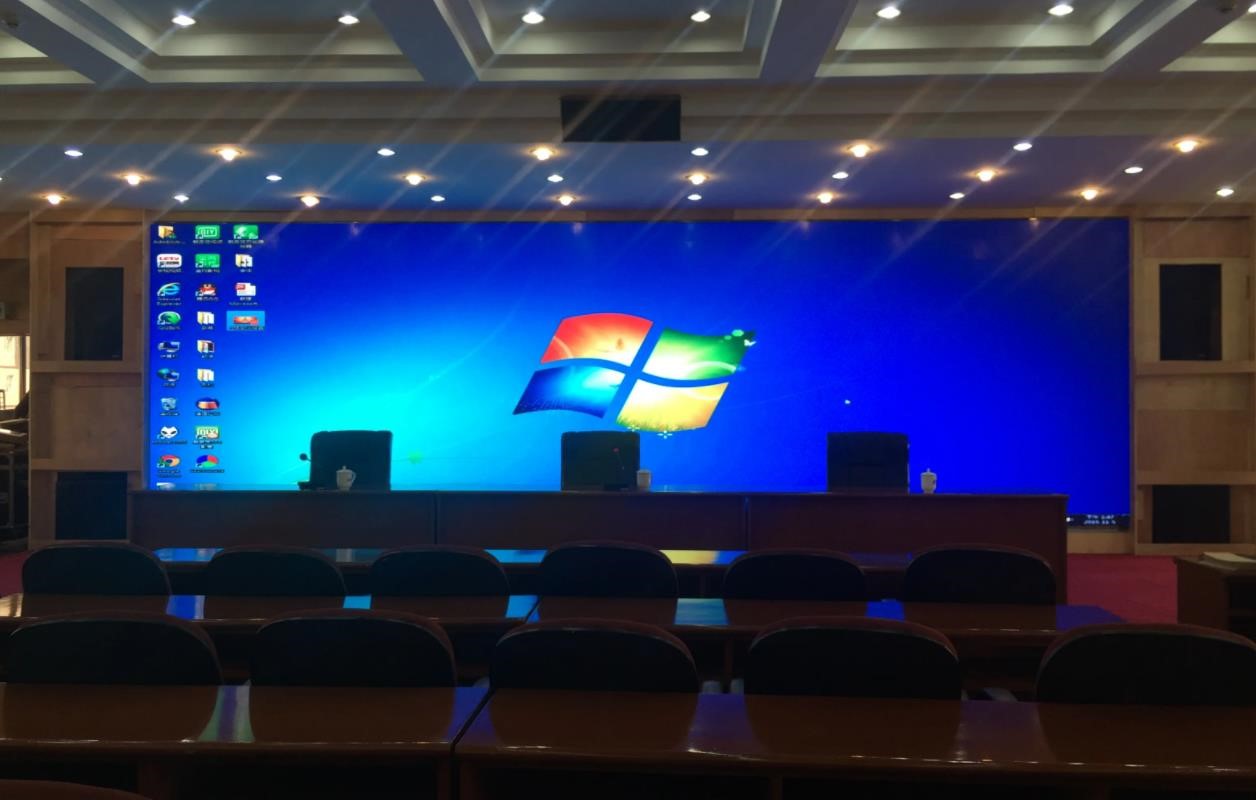 The key to building a large-screen display system for a conference room has the following parts, one is the selection of display products, the other is the selection of corresponding control equipment according to the input signal source and function, and the third is the software part, such as the realization of large-resolution 4K Display standard, etc.

First, the choice of display equipment

Due to the different display technologies used by each display product, there are also certain differences in the effects presented. Different conference rooms and our needs are different, and the selected conference room large-screen products are also different.

The LCD splicing screen is like a large screen composed of TVs spliced together, but its frame is narrower than that of TVs, which makes the effect after splicing better. At the same time, its panel is industrial grade, which can be continuously The panel is more stable when it is turned on and used. In the past, LCD splicing screens were mainly used in monitoring display occasions, but with the emergence of ultra-narrow patchwork products, LCD splicing screens have also begun to be applied to the field of large screens in conference rooms.

Its main advantages include: high resolution, high contrast, moderate brightness, long viewing without glare, and rich colors. At the same time, because it can be used in splicing, it can be spliced into a display area of any size according to the size of the conference room, which meets the needs of users with different viewing distances in different occasions. Of course, the key point of the LCD splicing screen is that it can realize the simultaneous input and display of multiple computer signals. If we have 4 computers in the conference room, we can display one image on each screen through the control device, which is often used in data comparison. used.

Therefore, the LCD splicing screen is suitable for conference rooms with more than 10 people. The user's requirement for the display screen is more than 100 inches, and there are many computers that need to be on the screen, and the pursuit of clarity and visual effects.

The conference tablet is a large-screen display product specially developed for conference room display. Its single screen size is between 65 and 100 inches. It is actually an enlarged tablet computer. It can realize touch and writing functions, and also includes windows. The computer and Android dual system can be used as a computer or a whiteboard.

Its advantages include: 4K resolution, rich colors, no need for stitching, support for touch, and direct writing. But its screen is only 100 inches, so it is only suitable for conference rooms with less than 10 people. Since there is only one screen, it only supports one computer signal transmission.

In some occasions, users are concerned about the seam problem of LCD splicing screen, and then they will consider using LED display screen. When LED display screen is used for large-screen display in conference rooms, it has both advantages and disadvantages.

The advantage is that it has no seams, the whole screen is more complete, and the full-screen display effect is good. However, the defects are also obvious. First, the resolution is low, resulting in average image clarity; second, the brightness is too high (dazzling for long-term viewing); third, there is the phenomenon of dead lights, and black spots and dark spots will appear over time. , resulting in a high after-sales rate.

Therefore, led display screens are mostly used in large-screen occasions in conference rooms with more than 100 people, such as auditoriums, lecture halls, conferences, etc., where the number of viewers is large, and the user is far away from the screen. At this time, its resolution defect is not obvious. , and not too dazzling.

Dlp large screen is a professional monitoring display device for the first time. Like LCD splicing screen, it is mainly used in video monitoring room. Due to its small patchwork (only 0.2mm) and high resolution, many conference rooms are large. Screen users will also use dlp, but in recent years, with the emergence of more cost-effective products, the market application of dlp has gradually shrunk. mainstream of the market.

Since the traditional LCD splicing screen cannot achieve 0 seam splicing, the current size can only be 0.88mm, and the user appreciates the display effect and stability of the LCD. Therefore, our company Weikang International has developed a solution for this situation. A seamless splicing LCD technology that can indirectly achieve 0 seam splicing has become the choice of many high-end conference room large-screen display users once it is launched. It eliminates the original physical frame through an LED light source compensation technology, and at the same time restores the image of the frame position through the LED, so as to achieve the effect of the integrated display of the liquid crystal and the LED, thereby shielding the frame of the liquid crystal.

The seamless splicing LCD screen is equivalent to a display device that integrates the LCD splicing screen and the LED display screen. Its display effect is the most comprehensive, and it is suitable for large-screen display systems in various conference rooms.

The so-called control system is mainly to solve the connection problem between the signal source and the large screen in the conference room. Usually, the use of distributors and matrices is overwhelming. If we only have one computer signal, we only need full-screen display. In this case, a distributor is used. Can. And if there are multiple computer signal inputs, a matrix is required for switching. If we are using led display or dlp, then we need to control it with an external splicing processor.

Since most display devices do not have a sound function, we also need to install a separate sound for sound playback. If it is some special occasions, such as big data management, high-definition, point-to-point display is required, then it needs to be implemented with the corresponding conference room large-screen software and high-configuration computers, which are all part of the software.

Therefore, for a comprehensive conference room large-screen display system solution, the most important thing is to select suitable display equipment, followed by selecting the corresponding control system according to the requirements of the display function, and thirdly, various specialized customized software, so as to achieve Comprehensive display capabilities.